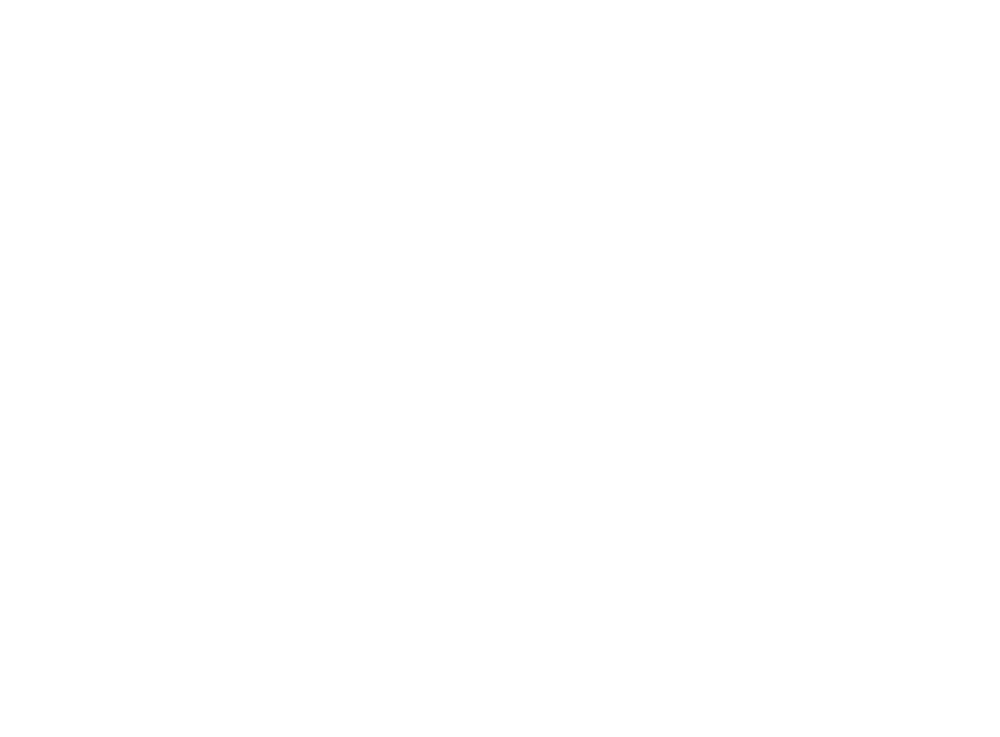 “The floating light bringing the precious moments to the city scatters into the grey and white space like in a silent film and slowly shines the modern simple residence located in Linkou. The Hermes orange as the prelude at the entrance suggests the fashion and exquisiteness in the city and unveils the leisurely and soothing atmosphere. 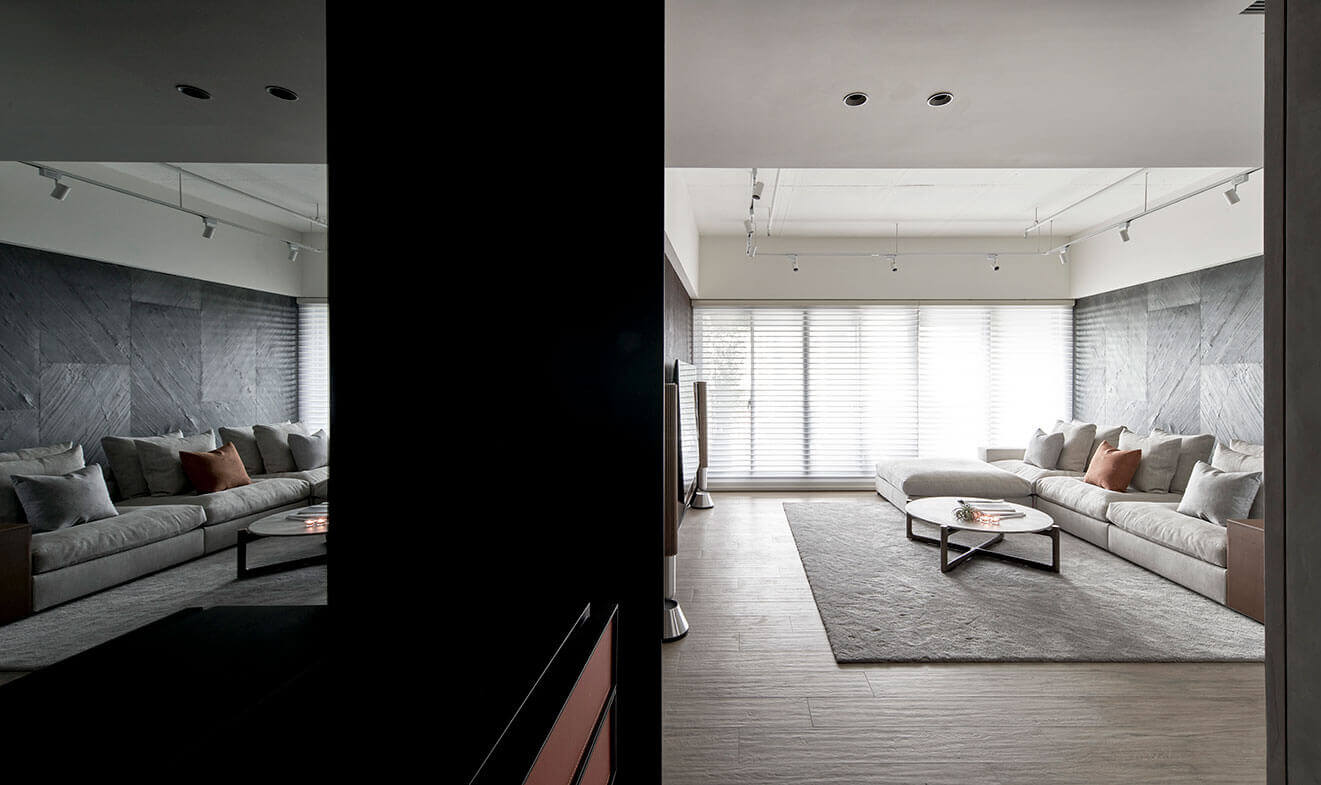 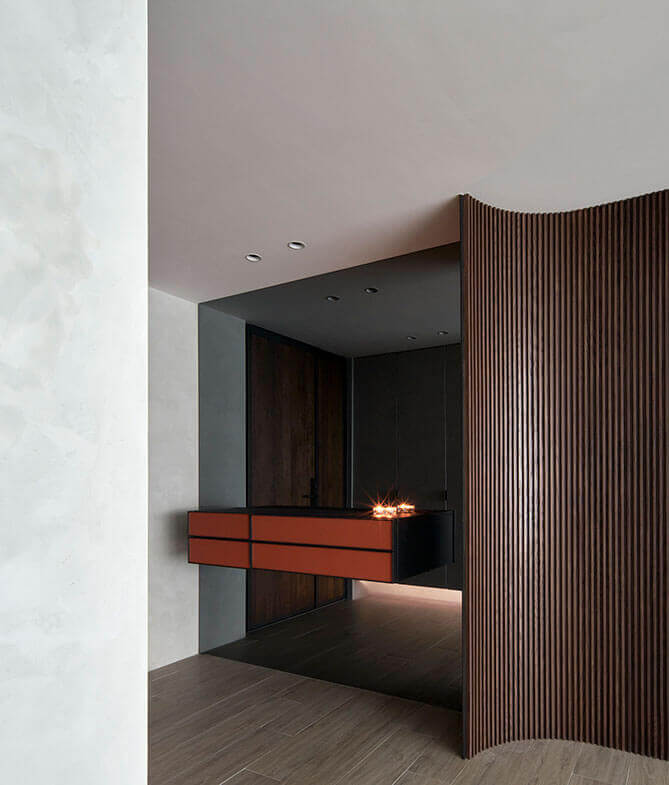 At the entrance, the black mirror and Hermes orange drawer cabinet support each other in forming the first indoor end view, which smoothly leads to the living room with the arc grille in the dark and mild wooden color opening the arms like an old friend and gently embracing every exhausted body and mind returning home. The arc grille style of the TV wall encircles the field. The regular and detailed wood sticks shine in the reflection of light and give forth the leisurely feeling. 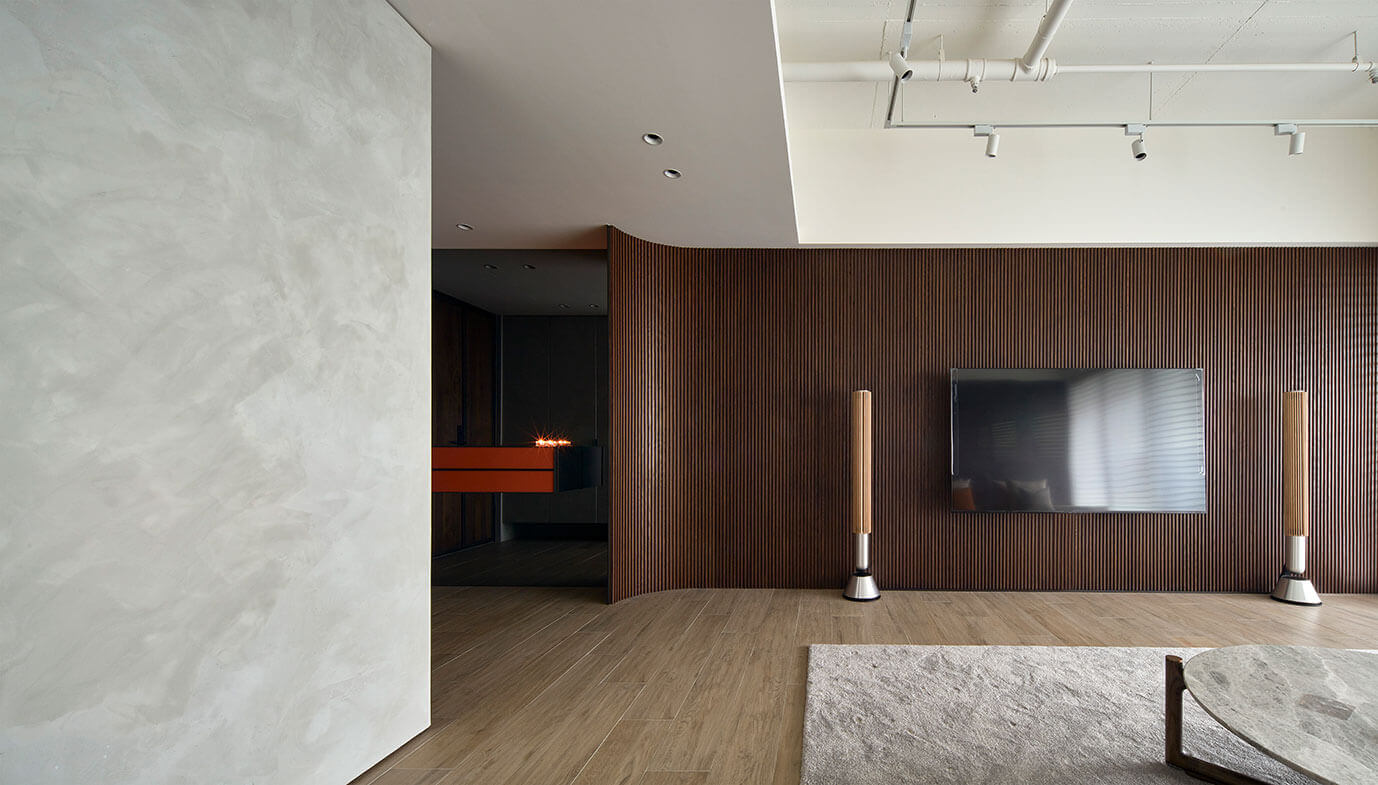 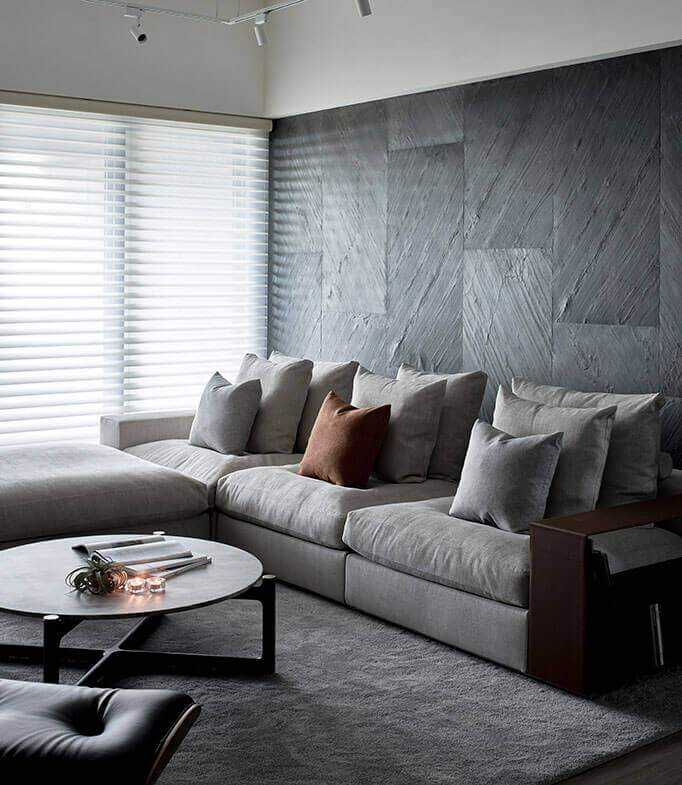 The grey sofa, tea table, and carpet softly whisper the leisurely feeling of the living room. On the background wall are the stone slabs rich in rough patterns. The dark grey coarse texture converses with the natural patterns of the wood grille of the TV wall. As plenty of sunlight strolls indoors, both are neutralized to show harmony. The ceiling keeps the original indoor height and naturally bares the lights and pipelines. The messy lines are tidied up in the easiest way. Returning to simplicity, the home space is carefree and leisurely. 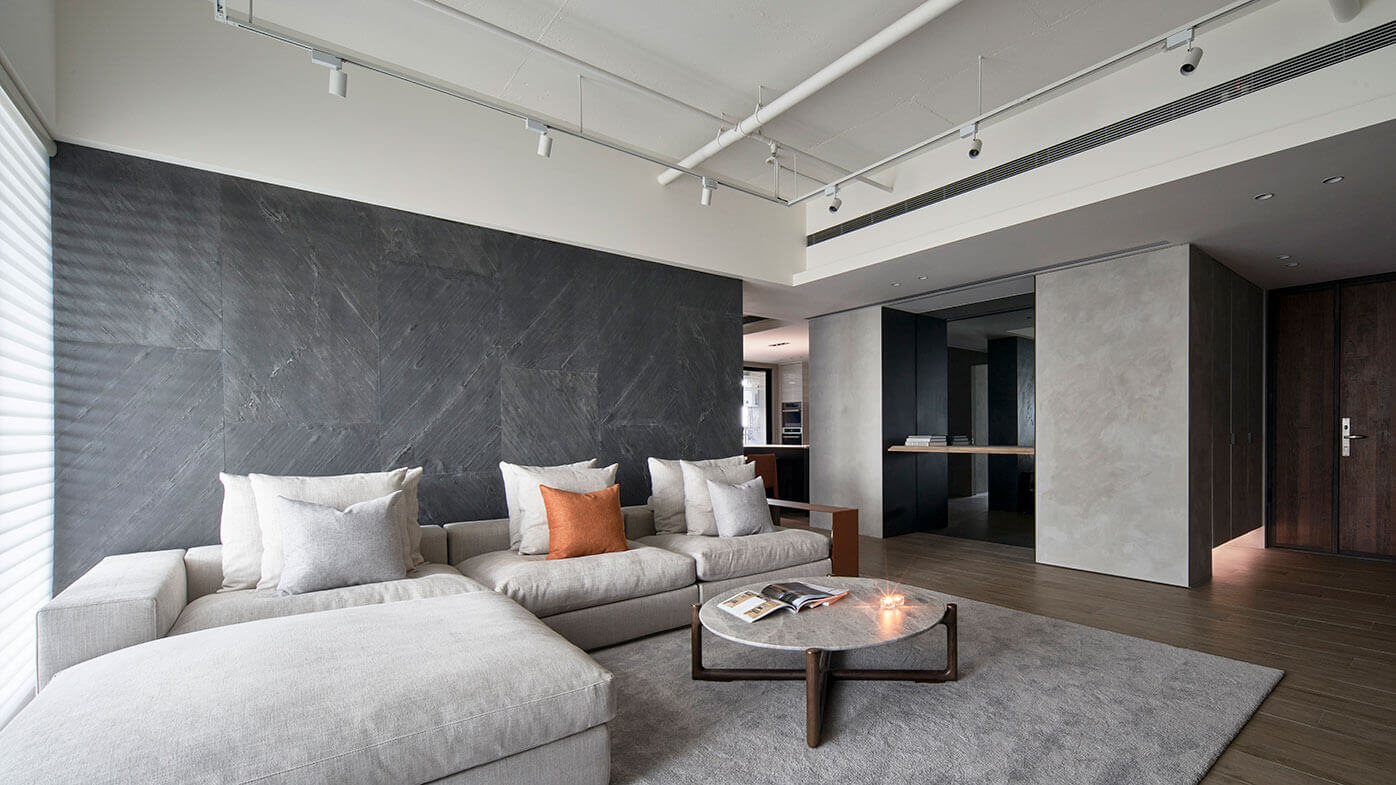 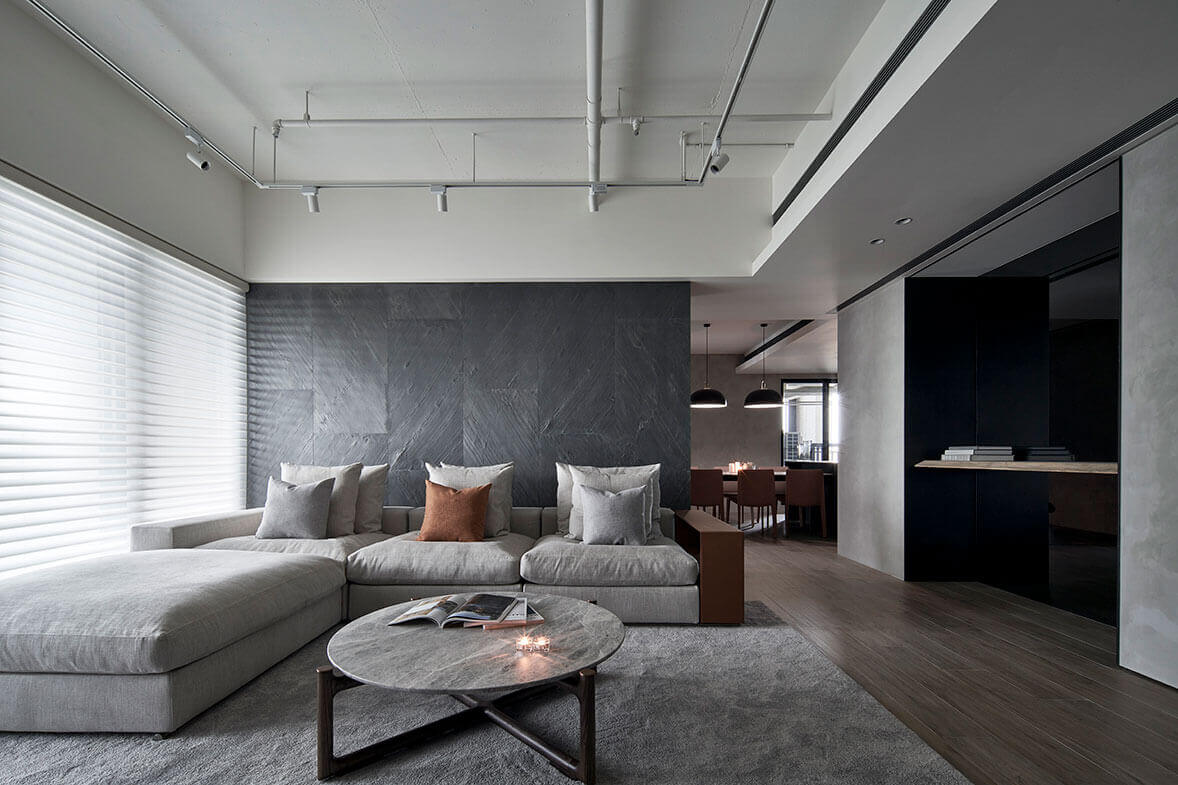 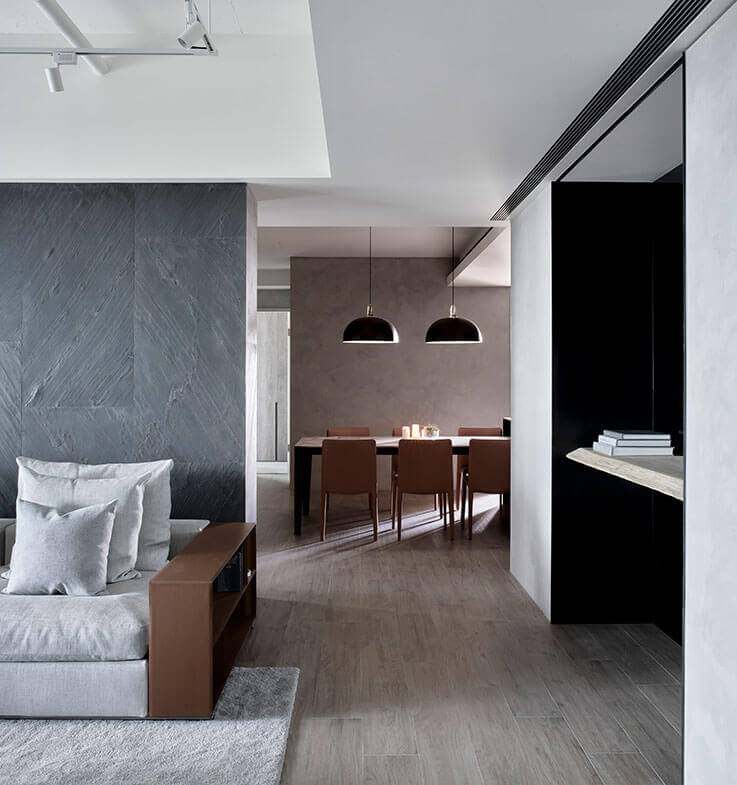 The dining room and kitchen is for family feasts. It is also another grey and white space where natural light make changes with time. The stage of light is built with the handmade paint as the base. Gaze at the thought-provoking image through the long lens, enjoy the pure tranquility, and calm the restless mind. The tawny orange leather dining chairs arranged around the grey colors become the focus. Just focus on the delicacies in front at the moment and enjoy the daily time of gathering together with family. 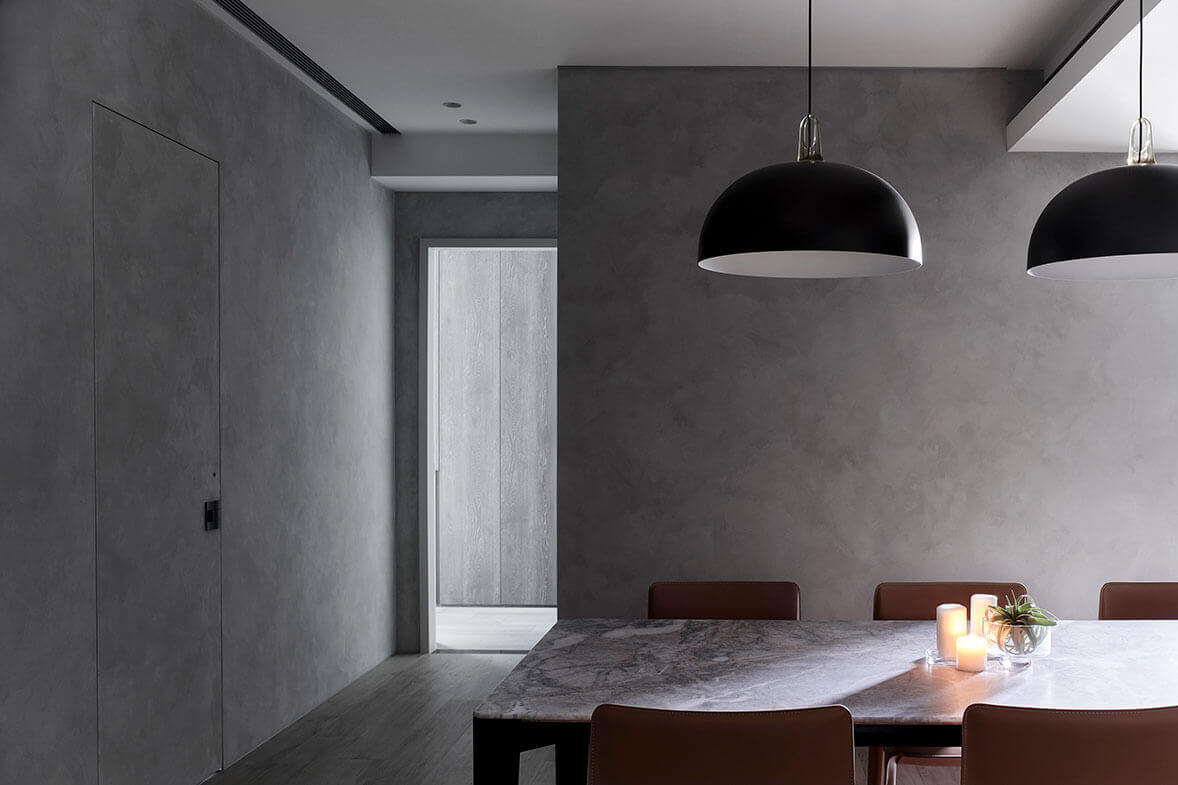 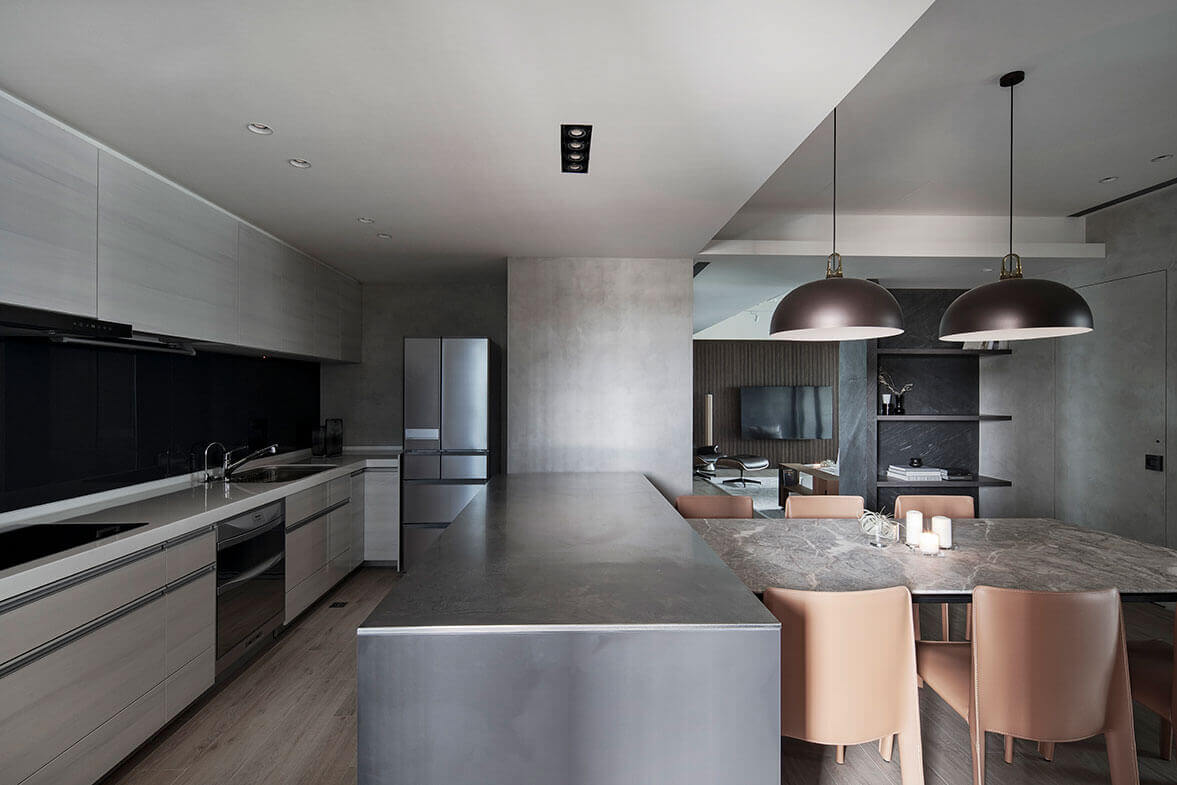 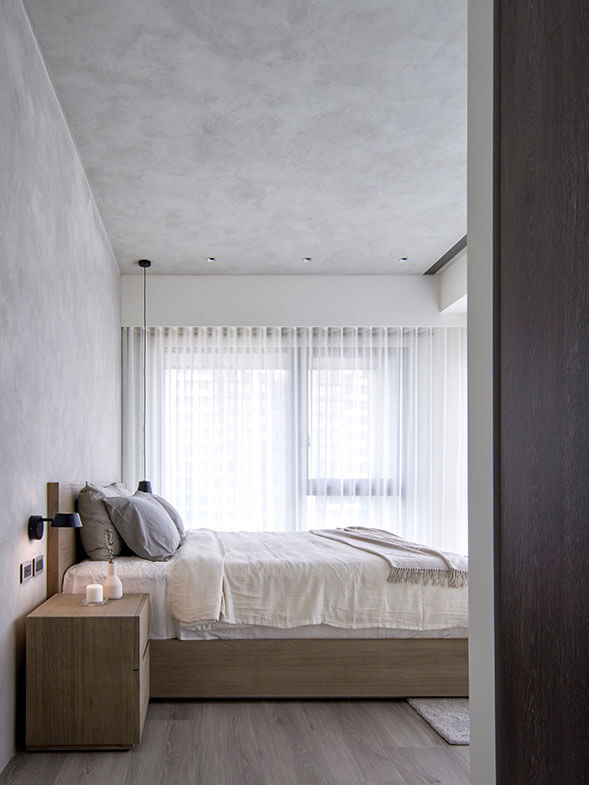 The scene of the film narrative turns to the master bedroom. The grey handmade paint extending from the main wall to the ceiling and the light-color wood floor complement each other. The entrance wall makes use of the L-shape turn to create the stacking frame scenes in the room. The purity of white and the low profile of grey seem to make sharp contrast, but they look warmer when harmonized by the light. 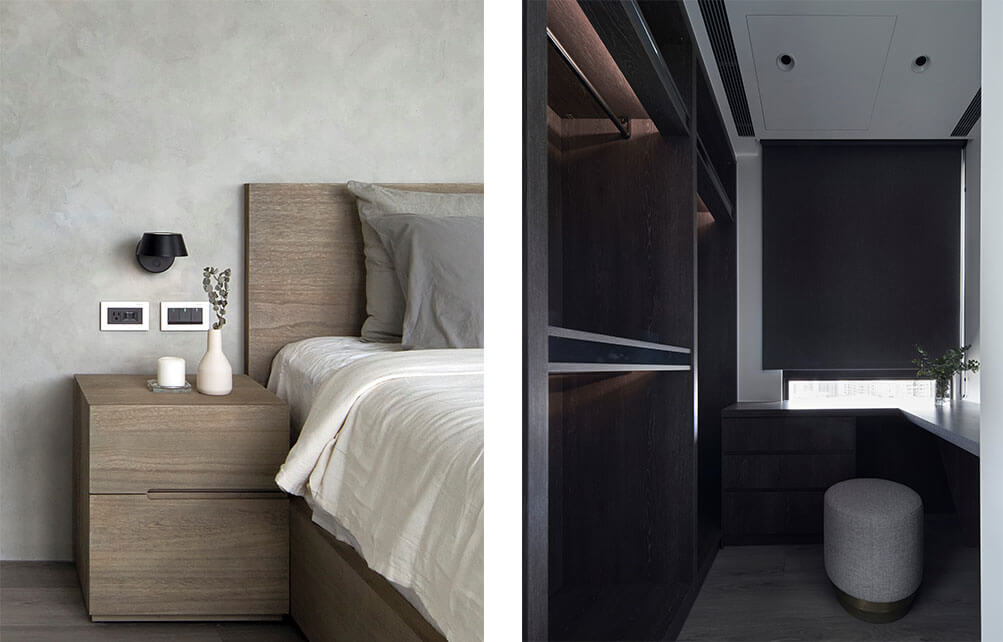 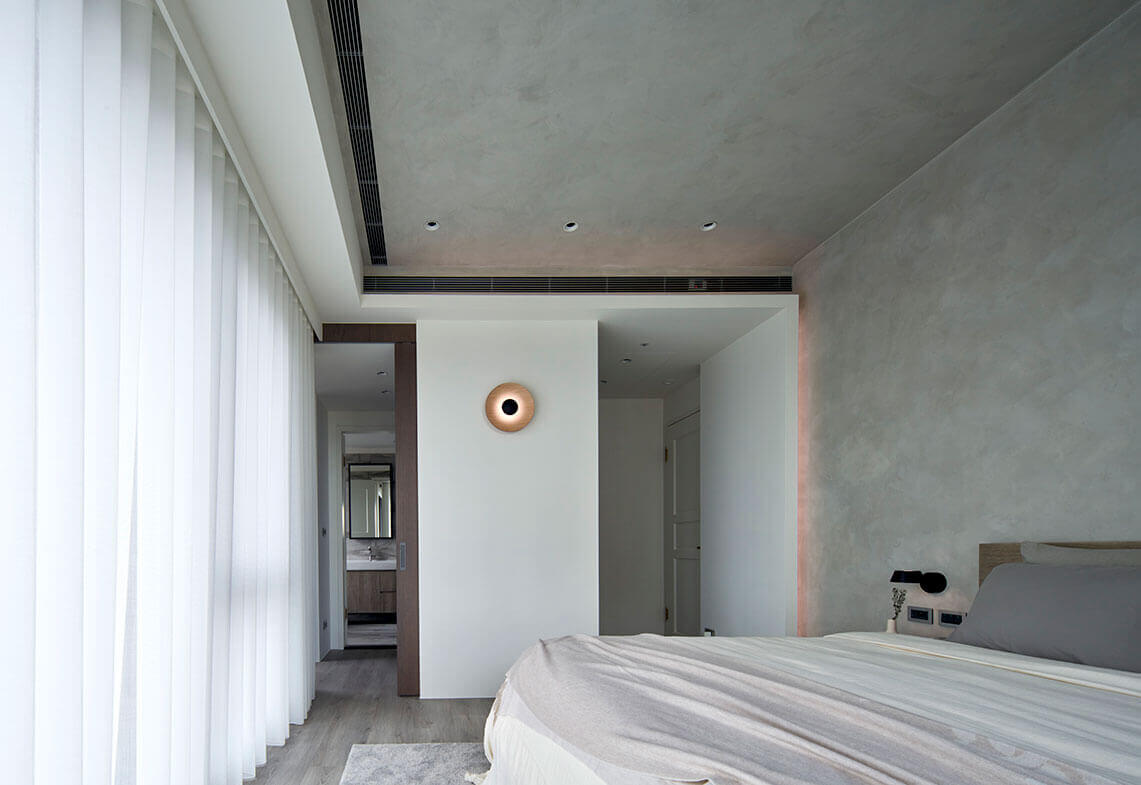 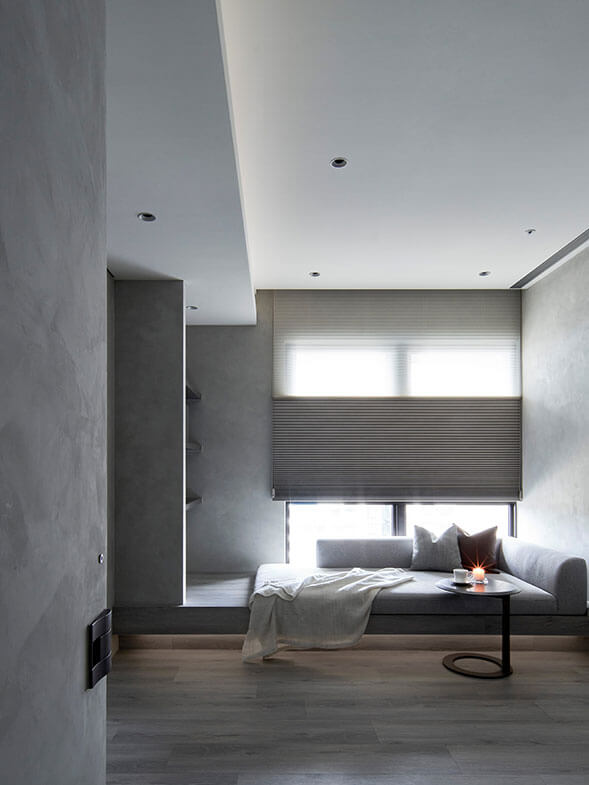 Such carefree and leisurely feeling also extends to the study. Also featuring the colors of grey and white, the study shows the vivid character through the couch by the window and the limited Lakers jersey of Kobe for winning three consecutive championships on the wall. The cityscape outside the window makes the splendid scene of the leisurely home with urban character. In the hustle and bustle of the day, the traffic never stops. As the night falls, the moon and stars come out and the clamor gradually fades away. It’s time to rest on the couch lazily, overlook the night view of the city, and enjoy the ritual of final chapter in the night. 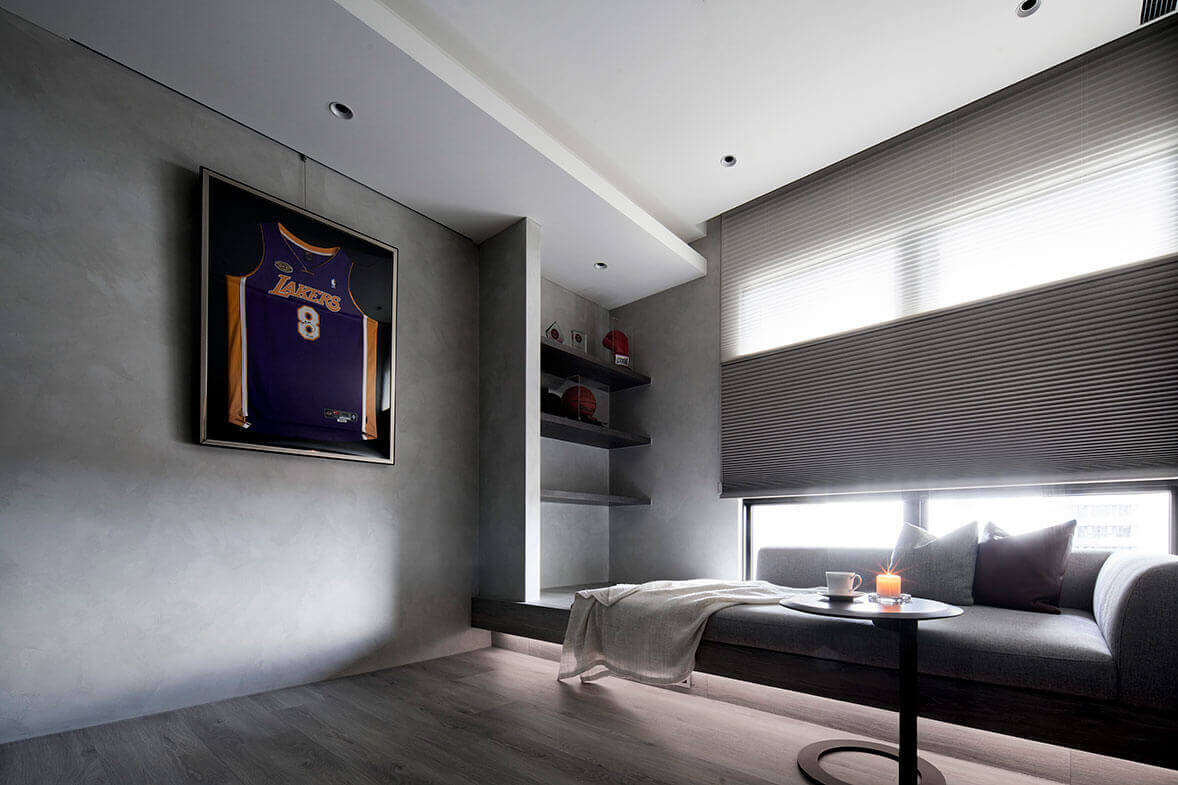 When we look at the residence, we see the atmospheres light presents in the different space. In the interior design, the Hermes orange embellishes the grey colors. The design of the wall with arcs and turns composes the modern urban style with uniqueness and character. The integration of fashion and leisure depicts the picture of a home with the natural lexicon. 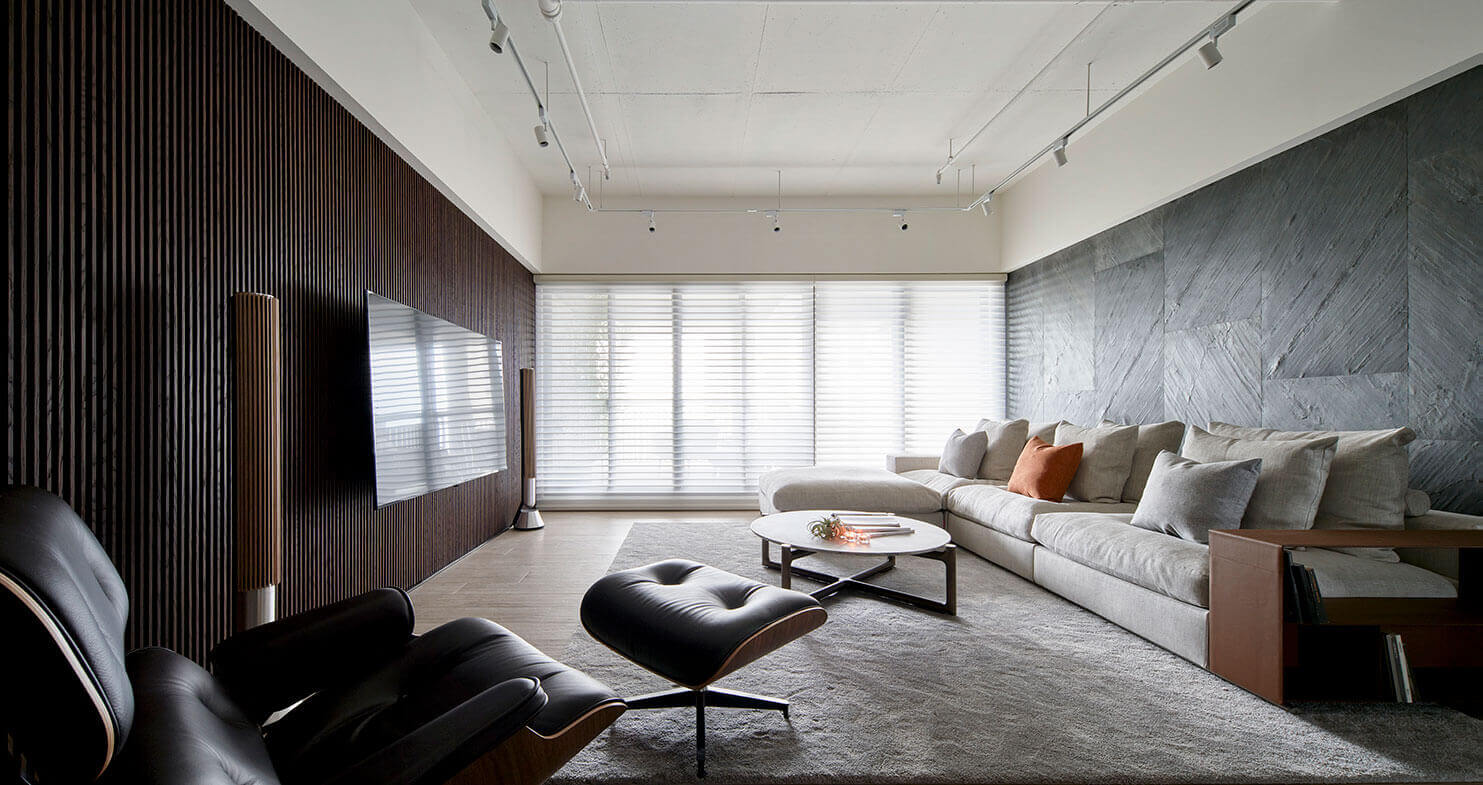 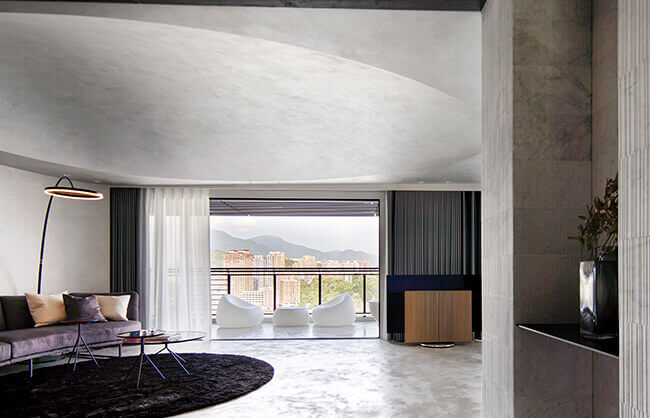 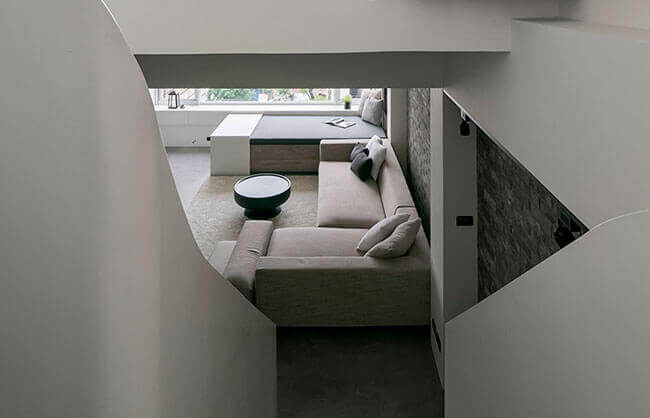 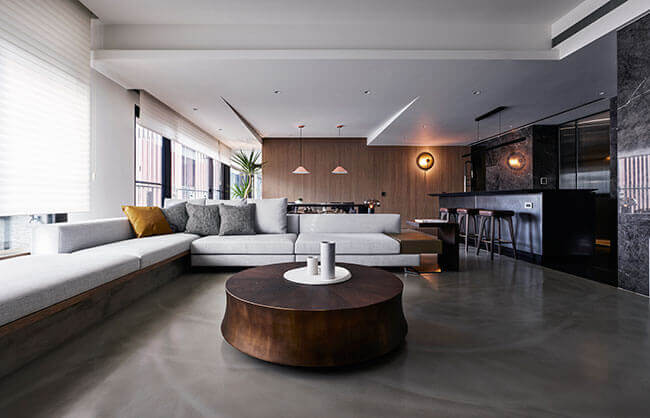 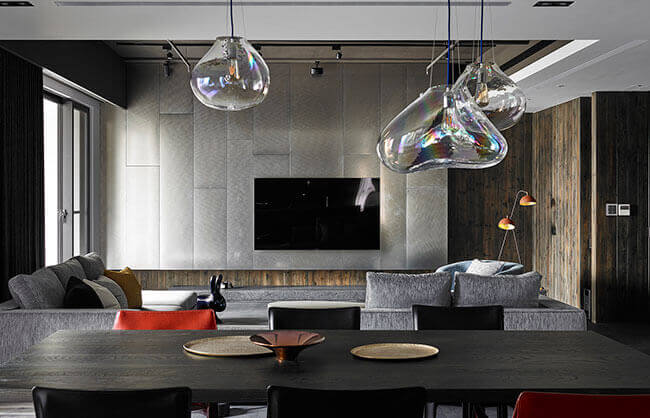